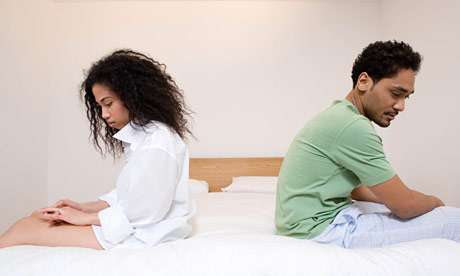 You were a steamy sex pot, ready and willing whenever your man wanted you. Sex on demand plus all of your other great qualities made him put a ring on it. You married, and then life happened! First came late notices on bills, and your pussy juices just didn’t flow the same. Nothing can make a woman lose interest faster than being unsure about financial security. Next, the kids came followed by baby weight that just wouldn’t disappear. Now, it’s tons of excuses as to why your husband can only get sex once a month if he’s lucky.

SOMEHOW, SLURPING ON THE DICK MIGHT WAKE THE BABY!

Or perhaps, you don’t want the children to know that mom and dad’s door is locked because you’re doing what got them here in the first place.  Maybe you’re just flat out tired, and sex is the last thing on your mind. The problem is….. sex is rarely the last thing on HIS mind. However, the day you snatched his balls away, left him with an inability to muster the courage to tell you that he just wants a good fuck! Therefore, he’s left to find sexual gratification elsewhere in whatever form it’s available to him.

I know, I know. Your relationship is more than sex. Sex is shallow, and if he doesn’t respect you enough to go long lengths of time without it, he can just leave!

SAVE THE DRAMATIC BULLSHIT!

He’s sick of you using sex as a special holiday treat. After listening to him complain, confess his infidelities or even his burning desire for physical pleasure, I’m sick of it too! You should be ashamed! If he gets caught being unfaithful on any level, there’s hell to pay. But you started it! You started it with your complete disregard for his feelings. You started it by getting comfortable, and damn near arrogant with the fact that a man loved you enough to give you his last name.  It seems you feel like you don’t need to do anything else. You started it by thinking that men and women think the same. More often than not, a man won’t deny his woman sex because she failed to complete a minor to-do. Women on the other hand are quicker to use sex as a weapon. That type of thinking is completely absurd!

Of course, I’m single. Who else would be so insensitive to your determination to be a bore in the bedroom?!

I was married with three children, and I made some of the same mistakes I warn you about. I also happen to be the woman that many husbands confide in. It may be cheaper to keep you, but sacrificing ones happiness can get pretty expensive.

You’re a fool to think a man will spend the rest of his life remaining unsatisfied AND faithful.

If you know you’ve been sexually selfish, check- in with your husband; allowing him the space to be completely honest without foolish consequences. Or he can just keep coming to me. While I have no interest in sleeping with him, I can be a pretty good ego stroker especially for seventy-five dollars an hour. That money can go towards YOUR children’s college fund or MY children. The choice is yours! Just don’t say I didn’t warn you.