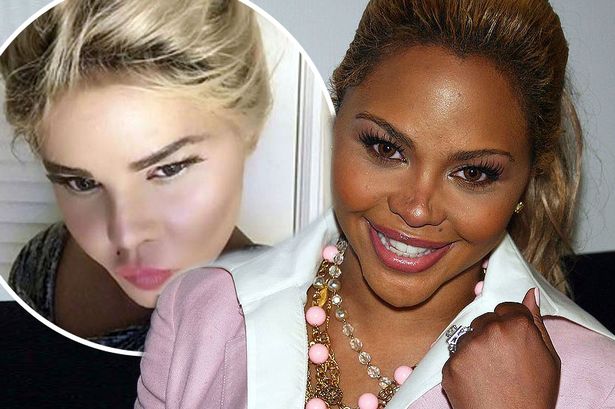 Dafucq! I can’t take it anymore. Some people will say I have no right to stand in judgment of Lil’ Kim and her constant skin bleaching. However, it’s MY blog and I’ll express my opinion if I want to!

I will not sit by quietly while I watch black women promote self-hate as being fabulous!

I’m not sure how many young girls even know who Lil’ Kim is or if they look to her as a role model. However, society is consistently pushing an agenda that black women are not acceptable as they are. Obviously Kim has fallen victim to that foolish thought process and has now become part of the problem. Many believe that fake tits, ass and a Birkin bag are sure signs of success and high confidence. Some women won’t even leave the house without their Pretty Hair. This hair doesn’t grow from their scalp but was purchased for a high retail price. I’m sick of seeing women unbothered while flipping someone else’s hair.

Women, how can you say you want a REAL man when everything about you is FAKE?

I recently went in on famous rapper Trick Daddy for his message to black women. While I didn’t like his delivery to Black hoes, some of his message had valid points. I think the overall message to Black women was to condemn the amount of effort spent on outward appearance while lacking a high moral character. Of course, those aren’t the words he used. But, that’s my attempt at an intelligent translation of his rant.

Lil’ Kim appears two seconds away from self mutilation. But, many will turn a blind eye as we all have for years. The 1990’s touted blonde hair and materialism as must haves to maintain the status quo. Mary J. Blige, Faith Evans and even Puffy’s mom were all well-to-do blondes. Therefore, no one really blinked an eye when Kim showed up on her second album “Notorious K.I.M” with blonde hair, a tummy tuck, bigger breast and new teeth. But, it didn’t stop there. Kim has gone on to alter her nose, lips, cheekbones, butt, hips and skin color. I often wonder just how white she desires to be. Lovers of self-hate, who are also known as her fans, will come to her defense spewing rhetoric and applauding her; affirming her unhappiness by applauding every wicked alteration to her physical appearance.

Yes, it’s Lil’ Kim’s body and she can butcher it if she wants to. But it’s NOT beautiful. She and many other Black women have bought into this white is right bullshit. Women don’t even know how to look like women anymore. Heavy makeup with extreme contouring has turned real women into bonafide drag queen look-a-likes. Women have traded in delicate features for drawn on eyebrows that jump off the damn page! I hope the masses aren’t fooled. What we are witnessing is low self esteem, lack of self worth and self-hate wrapped in plastic body parts with expensive clothes. In all fairness, Lil’ Kim is not the only Black woman wearing this disguise. It’s sickening and I want us all to do better. We have young girls coming behind us. We need to love who we REALLY are so we can teach them to love themselves. “Black Girls Rock” can’t just be a once a year television special. And, Black girls DON’T rock when they are focused on trying to look like White ones.